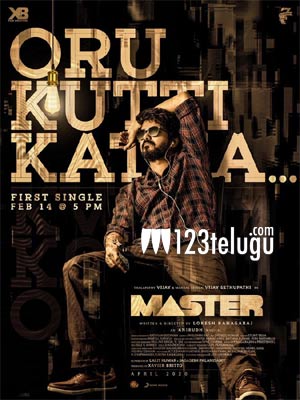 The shooting for Tamil star Vijay’s ongoing action thriller, Master is underway at a brisk pace. On the other hand, the makers have already kick-started the promotions and unveiled the first look posters.

Now, the latest update is that the first single from the album will be out on February 14th as Valentine’s Day special. A new poster with the song name mentioned on was released by the team a while back.

Being directed by Lokesh Kanagaraj, Master has Vijay Sethupathi in an antagonist’s role. Malavika Mohanan is the female lead. Mahesh Koneru will be releasing the film in Telugu.