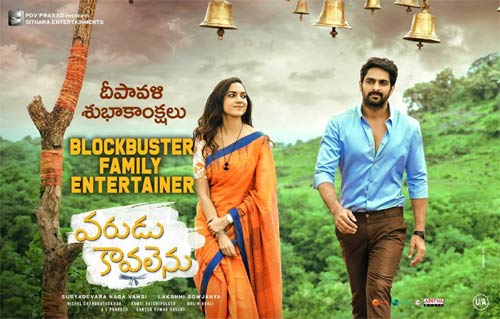 With the new Diwali releases failing to click at the box-office, Naga Shaurya and Ritu Varma’s Varudu Kaavalenu has again turned out to be the preferred choice for Telugu movie lovers this Diwali. This breezy romantic family entertainer has love, entertainment and family emotions in equal parts and continues to attract young and family audiences to theaters this weekend.

Varudu Kaavalenu’s makers are elated to see the film’s collections picking up during the Diwali festive season. The film is expected to continue its good show over the weekend and even the coming week. Audiences are enjoying Naga Shaurya and Ritu Varma’s chemistry and Sapthagiri’s ‘lag’ comedy in the second half.

Also starring Nadhiya in a lead role, Varudu Kaavalenu has been directed by debutant Lakshmi Sowjanya and produced by Naga Vamsi under Sithara Entertainments banner. Vishal Chandrasekhar and Thaman have composed the soundtrack.