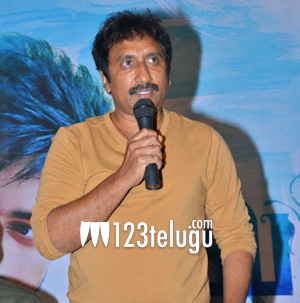 The theatrical trailer of young Mega hero Varun Tej’s forthcoming romantic entertainer, Mister, was unveiled in a grand event last night. Speaking on the occasion, the film’s director Sreenu Vaitla had some kind words of appreciation for the young hero.

Sreenu Vaitla said he had worked​ with Chiranjeevi, Charan and ​Varun Tej from the Mega family and that Varun Tej is as dedicated towards his craft as Chiru and Cherry. The director went on to say that Varun’s ​performance will connect well with the audience.

Mister features Lavanya Tripathi and Hebah Patel as its leading ladies. Mickey J Meyer has scored the music and Nallamalupu Srinivas and Tagore Madhu have jointly produced this movie. Mister will be releasing on April 14th.