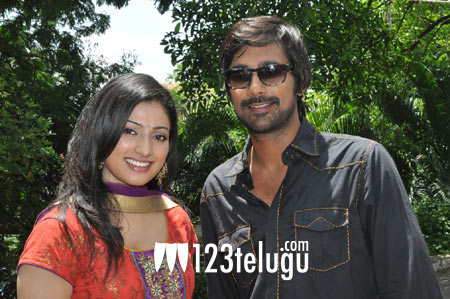 A new Telugu film starring Varun Sandesh and Hari Priya was launched earlier today in Ramanaidu Studios. Koneti Srinu is going to direct the film and Lakshman Kedari is producing the film on Lakshman Cine Visions banner. D Suresh Babu clapped the soundboard, Sampath Nandi switched on the camera and G Nageshwara Reddy directed the first shot. “This is my second production venture after Mem Vayasu Ki Vaccham. Most of the technicians who had worked for my earlier film are going to team up again for this film. The film’s regular shooting will begin from July 12 in Hyderabad,” Lakshman Kedari said. Varun Sandesh stated that most part of the film revolves around the heroine. “In a way, Hari Priya is the star of the film. I am sure it’ll be a great project for her. My father heard the film’s script and he loved it,” Varun Sandesh said. Hari Priya is making her comeback in Telugu after Pilla Zamindar. “This is my third film in Telugu. I didn’t get much recognition despite the success of Pilla Zamindar. Perhaps, I didn’t get enough screen time in that film, but I am hopeful that this film will bring me a lot of name,” Hari Priya said. Sekhar Chandra is going to compose the music.