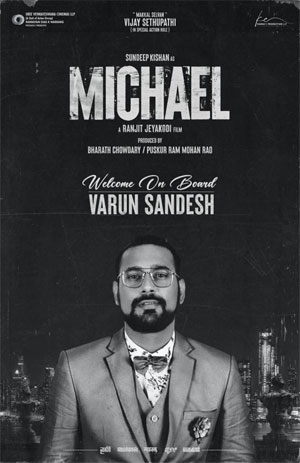 Handsome actor Sandeep Kishan will be seen next in Michael, an action entertainer. Makkal Selvan Vijay Sethupathi is playing a special action role in this movie.

Now, the latest news is that Telugu actor Varun Sandesh is playing a key role in this movie. The actor became so popular with Bigg Boss Telugu. The makers have announced the news officially.

Director Gautham Vasudev Menon is playing an antagonist while Divyansha Kaushik is essaying the heroine opposite Sundeep Kishan. Varalaxmi Sarathkumar who is one of the most sought-after actresses is also part of the project.

Ranjit Jeyakodi is directing this Pan India film to be released in Telugu, Tamil, Kannada, Malayalam and Hindi. The new shooting schedule of Michael has commenced from today in Hyderabad. Produced by Sree Venkateswara Cinemas LLP in association with Karan C Productions LLP, the film’s other cast and crew will be revealed later.