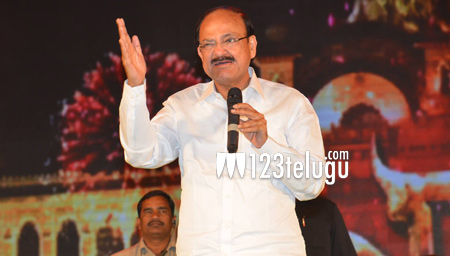 The team of Gautamiputra Satakarni is busy holding special screenings for all the dignitaries of both the Telugu speaking states. After holding some special shows of the film for KCR and Chandra Babu, Balakrishna held a special screening for Union minister Venkaih Naidu and few others earlier today.

Post the film’s screening, Venkaih Naidu hailed Krish and Balakrishna for doing a brilliant job in the film. Speaking to the press, Naidu said that Balakrishna is cut out for doing such historical films and no one can do a better job than him in such subjects.

Based on the ancient king Satakarni, this film is made on a huge budget and has Shreya Saran as the female lead.