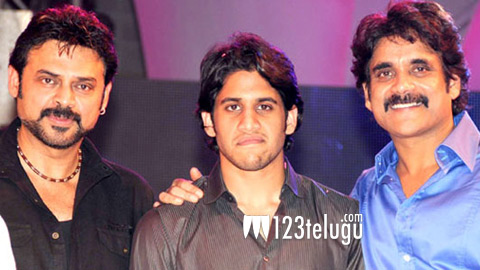 As per the latest buzz being heard, Victory Venkatesh will be the Chief Guest for Akkineni Naga Chaitanya’s ‘Thadaka’ audio function. The event is going to be held tomorrow evening at Shilpa Kala Vedika and it will be a star studded affair. Venkatesh’s presence has not yet been officially confirmed, but the chances are very high as Naga Chaitanya is Venkatesh’s nephew.

‘Thadaka’ has Naga Chaitanya, Sunil, Tamanna and Andrea Jeremiah in lead roles. Dolly has directed the movie and Bellamkonda Suresh is the producer. Thaman has completed the film’s music.

The film is the remake of the Tamil super hit ‘Vettai’. Naga Chaitanya and Sunil will be seen as brothers in the movie.