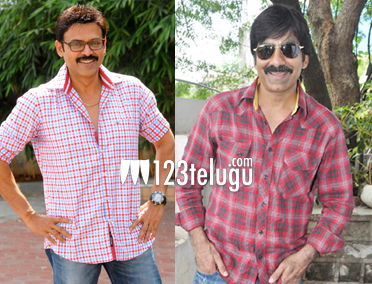 As per the latest reports, Venkatesh and Ravi Teja may soon team up for the remake of the Tamil blockbuster ‘Jilla’. Writer and director Veeru Potla of ‘Doosukeltha’ fame will be directing this flick. Starring popular Tamil star Vijay and Malayalam superstar Mohanlal in the lead roles, ‘Jilla’ is an intense action drama which was released during Pongal last year and went on to become a super hit.

Even though several discussions have been going on for a long time about the Venky-Ravi Teja combo, nothing was finalized until recently.Reports say that Veeru Potla has been working on the script for a long time to adapt it to Telugu sensibilities.

Venkatesh’s last film ‘Gopala Gopala’ was an above average grosser and Ravi Teja is coming up with high budget action entertainer ‘Kick 2’ soon. More details about this special combo will be revealed soon.