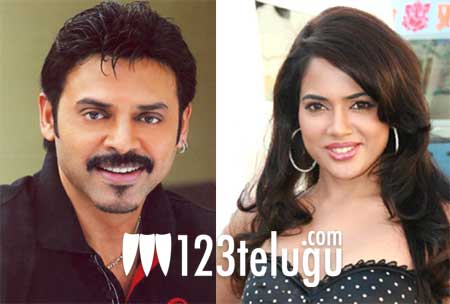 Rana’s upcoming film Krishnam Vande Jagadgurum will feature a special song and if the latest buzz is to be believed then Victory Venkatesh and Sameera Reddy are set to make cameos in this song. This will be the first time that Rana and Venkatesh will be seen together in a film, although for a small duration. On the other hand, Sameera Reddy, who was last seen in Gautham Menon’s Erra Gulabeelu, will sizzle in this special song and it’ll be a comeback of sorts for her in Telugu films. The film’s entire shooting has been wrapped up except for this song. Krish is directing the film and Saibaba Jagarlamudi and Y Rajeev Reddy are jointly producing the film. Mani Sharma has composed the music. The film has also been shot in Tamil and it’ll be Rana’s debut film in Tamil. Krishnam Vande Jagadgurum’s audio is going to be launched in Arjun theatre in Kukatpally on October 3 and the film is expected to release in the last week of October.