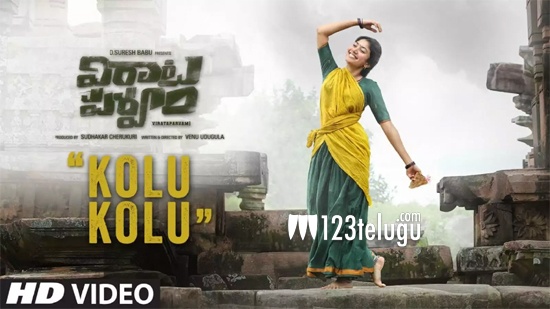 Star hero Venkatesh has just unveiled the first song from Rana Daggubati and Sai Pallavi’s upcoming period drama, Virata Parvam. Titled ‘Kolu Kolu’, the melodious song has an earthy, folkish feel to it and impresses music lovers with its old world charm. The song is a treat for all Sai Pallavi fans as she looks simple beautiful in a village belle avatar.

Kolu Kolu has been penned by senior lyricist Chandrabose, who came up with poignant lyrics to describe a young village girl’s love for her man. Rising playback singer Divya Malika has brought the song to life with her endearing rendition. Talented young composer Suresh Bobbili has come up with yet another winner in his career.

Virata Parvam also features National Award-winning actresses Priyamani, Nandita Das, Naveen Chandra, Eswari Rao and Nivetha Pethuraj in lead roles. This Venu Udugula directorial is being produced by Sudhakar Cherukuri, while Suresh Babu is presenting it. The film is slated to open in cinemas on April 30.