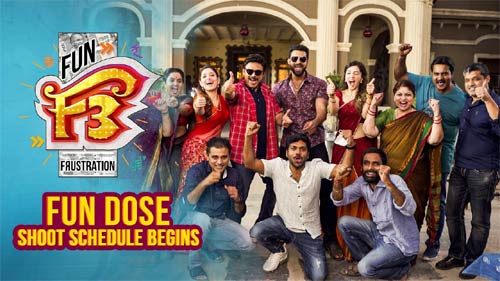 Venkatesh, Varun Tej, Tamannaah and Mehreen Kaur much-awaited comedy entertainer, F3, has resumed its shoot earlier today in Hyderabad. The film is a sequel to their previous blockbuster, Fun and Frustration (F2). It will be a lengthy schedule and the entire cast is participating in the shoot.

F3’s makers released an on-location making video, titled F3 Fun Dose. The video is full-on fun and assures that the film is going to be triple the fun generated by F2 a couple of years ago. All the four lead actors, Venky, Varun, Tamannaah and Mehreen, will be having special and unique mannerisms and characterisations penned by director Anil Ravipudi.

F3 is being produced by Shirish under Dil Raju’s presentation. Devi Sri Prasad is scoring the soundtrack. The film is slated for release during the Sankranthi festive season early next year.