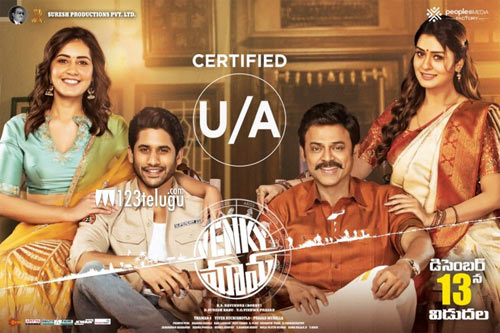 After much deliberation, the makers of Venkatesh and Naga Chaitanya’s highly-anticipated multi-starrer, Venky Mama, recently announced that the film will be hitting screens on December 13. Today, Venky Mama completed its censor formalities and received a UA certificate.

Venky Mama is an emotional family entertainer. Expectations are quite high on this film, since this is the first time that both Venky and Chay are sharing screen space in a full-fledged film. This Bobby directorial has Raashi Khanna and Payal Rajput as the leading ladies.

Suresh Babu and TG Vishwaprasad are jointly producing the film and Thaman has scored the soundtrack.