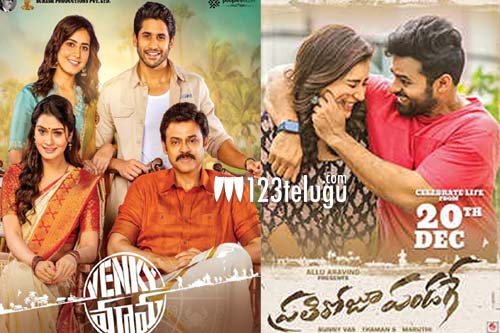 Venky Mama and Prati Roju Pandaage, the two latest super hits that brought a huge cheer to fans, makers and the buyers this year end, are all set to surpass two major milestones on Sunday.

While Venky Mama will be entering the Rs 30 crore club in AP and Telangana, PRP will be breaching the Rs 20 crore share mark in the twin Telugu states today. Both the movies will have a steady run at the box-office until the upcoming Sankranthi festive season.

Interestingly, both Venky Mama and Prati Roju Pandaage are family entertainers loaded with emotions. While Venkatesh and Naga Chaitanya along with Raashi Khanna and Payal Rajput played the main leads in Venky Mama, Sai Tej and Raashi Khanna are the lead stars in PRP.

Venky Mama is directed by Bobby and produced jointly by Suresh Babu and TG Vishwaprasad. On the other hand, PRP is a Maruthi directorial and it has been produced under GA2 Movies and UV Creations banners. Thaman is the music composer for both the movies.