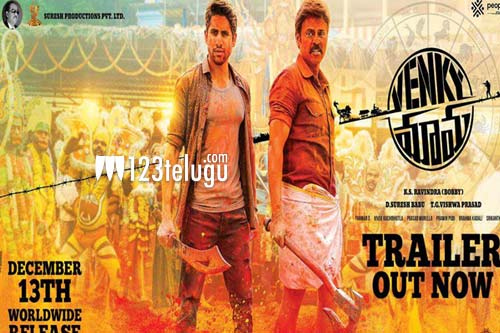 Venky Mama is up for a release this 13th of December as Venkatesh’s birthday special and there is a superb buzz for this film all over.

The trailer has been released today and the first impression that we get is that the film is going to be a mix of fun and emotions.

Venkatesh is seen in a very lively and emotional role which looks quite good in the trailer. On the other hand, Chay’s role also has a twist in the film which has been kept as suspense.

The film is all about the relation between Venky and Chay who get separated in an emotional manner. The comedy looks outright and also the heroines are looking glamorous.

Finally, the film is a feast for the family audience and for now, the trailer has lived up to all the hype.