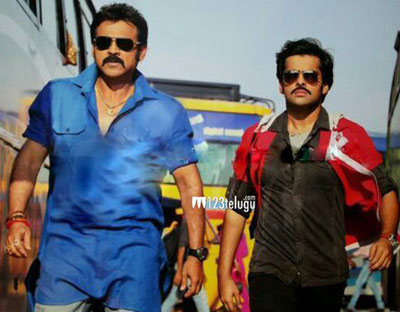 Venkatesh and Ram are working together for the upcoming film “Masala”. The movie has completed its shoot and post production activities are currently going on. As per the latest reports being heard, the makers of the movie are very keen to release the movie in October itself. An official announcement regarding the same will be out soon.

This movie is a remake of the super hit Hindi film “Bol Bachchan”, This film is being directed by Vijay Bhaskar K and Thaman has composed the music. Sravanthi Ravi Kishore and Suresh Babu are jointly producing this movie. Anjali has been cast opposite Venkatesh and Shazhan Padamsee will be seen with Ram.

The audio album has not been released yet and a new date for this is also expected soon.