Venue locked for Vikram’s pre-release event in Hyderabad
Published on May 29, 2022 8:08 am IST 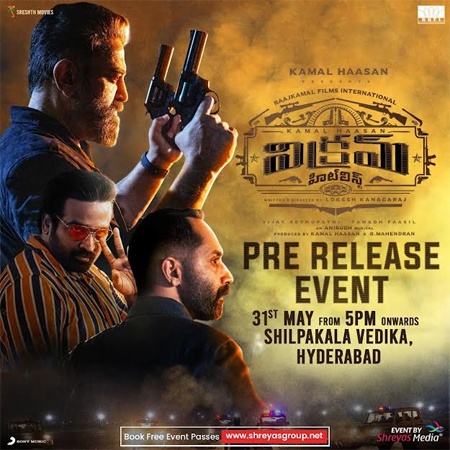 Kollywood star actor Kamal Haasan is coming up with an action entertainer called Vikram to entertain audiences again. Directed by Lokesh Kanagaraj, the biggie has Vijay Sethupathi and Fahadh Faasil in pivotal roles.

We have already reported that the pre-release event of the movie will happen on May 31, 2022, in Hyderabad. The latest news is that the event is going to be held at Shilpakala Vedhika in Hyderabad from 5 PM onwards.

Actor Suriya will be seen in a powerful role in the movie, which is produced by Kamal Haasan and R Mahendran under Raaj Kamal Films International. Scheduled to release on June 3, 2022, worldwide, the movie has Anirudh Ravichander’s music.