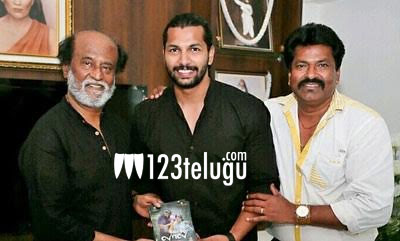 Veteran character artiste Charan Raj, popular amongst Telugu audiences through movies such as Athadu, Baasha, Gentleman, Komaram Puli etc, is all set to launch his son Tej as a hero.

Tej’s debut film in Tamil, Laali Laali Aararo, has completed its shooting part and is ready for its release this summer. Recently, the father-son duo and the film’s unit met with Super Star Rajinikanth and he unveiled​ the film’s audio CD.

Rajini blessed the young lad and recollected his memories with Charan Raj during the shooting of Baasha.