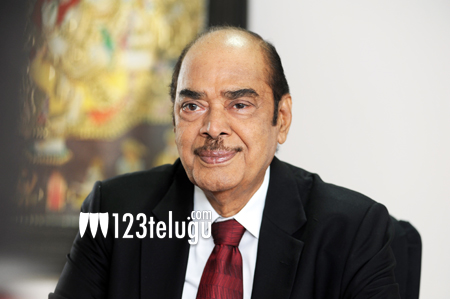 In what could be said as one of the saddest day in the history of Tollywood, veteran producer and Dada Saheb Phalke Award winner, D Rama Naidu passed away this afternoon. He was 79 and was suffering from age related issues for quite some time now. Born in Karamchedu of Prakasam district, Ramanaidu went on to produce more than 150 films in his illustrious career.

He started his own banner Suresh Productions with the super hit film Raamudu Bheemudu in 1964. He has produced films in multiple languages and has given break to many superstars. Ramanaidu represented the Baptala constituency in Guntur District in the 13th Lok Sabha from 1999–2004.

Ramanaidu was conferred with the third highest civilian award, the Padma Bhushan, in recognition for his contribution to Telugu cinema. In 2009, Ramanaidu received the Dadasaheb Phalke Award, India’s highest award for contribution towards cinema.  He also acted in many films and was widely to known for his special appearances in his productions.

Rama Naidu established a state of the art film studio in Jubilee Hills and has been providing services ever since. 123telugu is deeply saddened with this news and conveys condolences to his entire family.