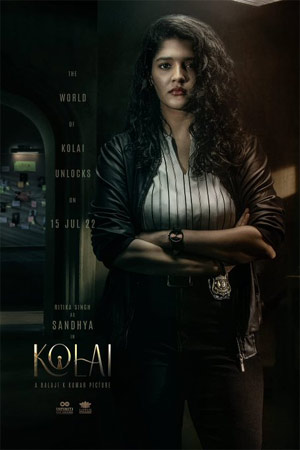 Kollywood’s composer-turned-actor Vijay Antony will be very soon seen in the film Hatya (Kolai in Tamil). Actress Meenakshi Chaudhary of Khiladi fame plays the character Leila around whose death the story revolves in this Balaji K. Kumar’s directorial.

Now the update is that the teaser of the film will be out on 15th July at 5:30 PM. Makers have revealed the look of Ritika Singh as Sandhya, the apprentice to announce the same. The character posters released so far are very interesting and promise a gripping investigative thriller.

Bankrolled together by Infiniti Fim Ventures and Lotus Pictures, the film has music by Girishh. The film also has Radikaa Sarathkumar, Murali Sharma, John Vijay, and Samkit Bohra in other pivotal roles. The film’s release date is yet to be announced.