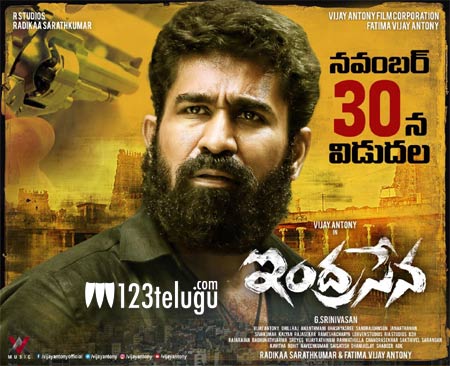 After gaining huge popularity among Telugu audiences with movies like Bichagadu and Bethaludu, Tamil star Vijay Antony is soon coming up with an out-and-out mass action thriller titled Indrasena. The film’s trailer was unveiled by Megastar Chiranjeevi last month and it created a good buzz for the movie.

As per the latest updates, Indrasena, along with its Tamil version Annadurai, is slated for a grand worldwide release on November 30. Vijay Antony will be seen in twin brothers roles in the movie. After Bichagadu scoring a huge success with mother sentiment, expectations will be high on Indrasena, which has a strong brother sentiment.