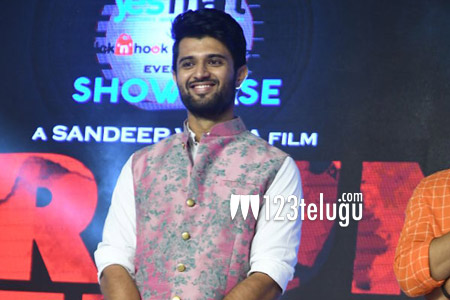 These days actors are leaving no stone unturned to promote their upcoming films. In fact, film promotions have become so important that actors are making a conscious effort to promote and talk about their films for at least 2-3 weeks at every possible medium.

Apart from social media and other conventional media, top-rated TV shows have become the biggest draw for film promotions. Of late, Bigg Boss Telugu has become the go-to platform to promote new films. Recently, Rana was the first actor to promote his film on Bigg Boss, and soon, Taapsee did the same for Anando Brahma.

Now, Vijay Devarakonda is also taking a cue from Rana and he’ll be seen in an upcoming episode of Bigg Boss. The actor flew to Lonavala to enter the Bigg Boss house and interact with the housemates. Vijay’s latest film Arjun Reddy is releasing on August 25 and the buzz around the film has skyrocketed in the past few days.