Vijay Devarakonda will be the next big thing in India-Puri Jagan
Published on Jul 21, 2022 4:33 pm IST 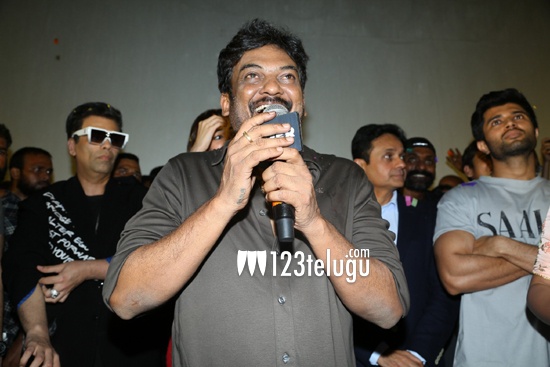 The trailer of Vijay Devarakonda’s Liger has been released by the makers and in no time, it has gone viral. The trailer begins with Vijay Deverakonda entering the ring, with Ramya Krishna’s voice briefing the reason behind the name of Liger for his son.

The trailer was launched on a single screen in Hyderabad and Puri Jagan made some startling comments on Vijay. He said that Vijay Devarakonda will be the next big thing in India post-Liger’s release.

Puri Connects is producing the movie, in collaboration with Bollywood’s leading production house Dharma Productions. Puri Jagannadh, Charmme Kaur, Karan Johar, and Apoorva Mehta together are bankrolling the film on a grand scale.

While cinematography for the movie is by Vishnu Sarma, Kecha from Thailand is the stunt director. Liger will have Pan India release in Hindi, Telugu, Tamil, Kannada, and Malayalam languages on 25th August 2022.