Vijay Deverakonda opens up about multi-starrer with Suriya
Published on Sep 30, 2018 9:10 am IST 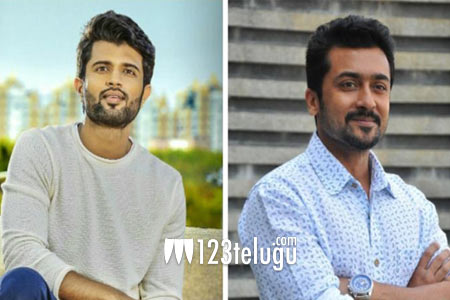 Vijay Deverakonda has been aggressively promoting his first Tamil-Telugu bilingual, NOTA. This intense political drama is slated for release on October 5. In a recent promotional interview, Vijay opened up about the possibility of working with star hero Suriya.

“So far there is nothing official that is happening. I think people are having ideas of getting us together. But, it hasn’t come to us sitting and talking about it yet. A couple of people have reached out with this idea,” said Vijay.

Both Vijay and Suriya have mutual respect for each other’s work. In fact, Suriya had launched NOTA’s trailer and Vijay had unveiled the trailer for Suriya’s recent production venture, Chinna Babu, starring Karthi.