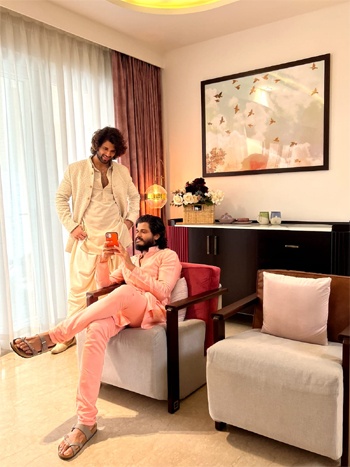 Vijay Deverakonda’s brother Anand’s upcoming youthful entertainer, Pushpaka Vimaanam, is releasing on November 12. Vijay is presenting the movie, and he’s leaving no stone unturned to promote it. Already, Vijay invited Allu Arjun to launch the film’s trailer at a special event on October 30.

Now, Vijay has planned two more special events in Vizag and Mahabubnagar. On November 7, a grand pre-release event will be held in Vizag, with Vijay taking part in it. And on November 10, Vijay will be attending a special premiere of Pushpaka Vimaanam at his AVD Cinemas in Mahabubnagar.

Geeth Saini and Saanve Megghana are the leading ladies of Pushpaka Vimaanam. Directed by debutant Damodara, the film has been produced jointly by Vijay and Anand’s father Govardhana Rao Deverakonda, Vijay Mattapally and Pradeep Errabelly.