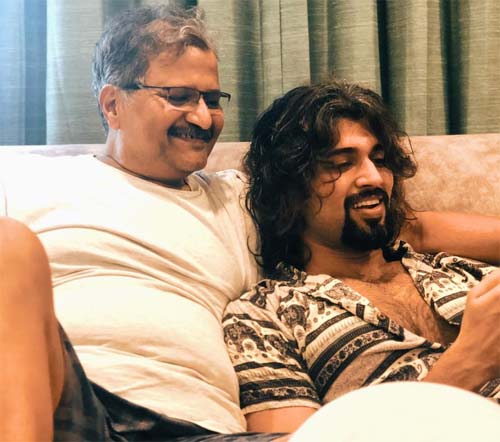 Vijay Deverakonda has revealed his new look on Instagram where he wrote a small tribute to his father on the occasion of Father’s Day. He has gone through a big makeover during quarantine. Sporting long hair and a French beard, the actor looks quite different; however, it’s unlikely that it’s for a feature film. Before the lockdown was announced, Vijay had been shooting for his upcoming film with Puri Jagannadh in Mumbai. Ananya Pandey is the lead actress in the film.

Thanking his father for always supporting him and his decisions, Vijay said, “”I’m with you.” is all he says everytime to my decisions, mistakes, risks, adventures, and wars I take on. The first Deverakonda.”

It’s no secret that Vijay’s father has been quite supportive of his son’s career and even helped him while setting up the production house, King of the Hill entertainment. At one point of time, he himself was associated with the TV industry and worked on several projects before he moved on.

"I am with you." Is all he says everytime to my decisions, mistakes, risks, adventures and wars I take on. The first Deverakonda – Happy Father's Day Daddy – I love you ❤️