Vijay Sethupathi’s mass look from Uppena to be out tomorrow
Published on Feb 9, 2020 6:37 pm IST 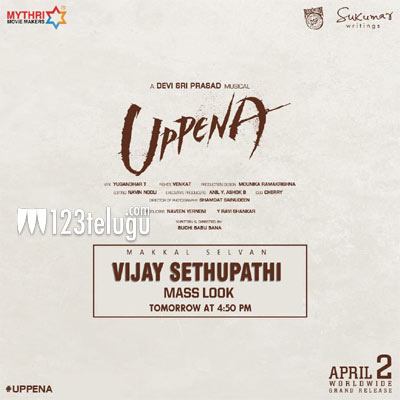 After the striking first look and the pre-teaser, the makers of young Mega hero Vaisshnav Tej’s debut film, Uppena, will be unveiling the first look of Tamil star Vijay Sethupathi. Makkal Selvan’s mass first look will be out at 4:50 pm tomorrow.

In Uppena, Vijay Sethupathi will be seen in a negative role. The film has debutant Krithi Shetty playing Vaisshnav’s love interest. Debutant Buchi Babu Sana is directing the movie and Sukumar is co-producing the film in association with Mythri Movie Makers banner. This DSP musical is slated to release on April 2.