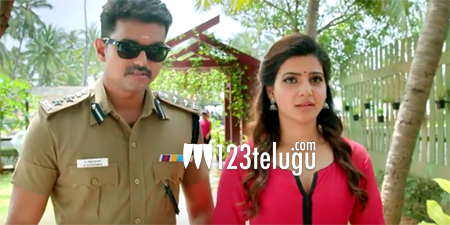 Tamil superstar Vijay’s Theri is one of the most eagerly awaited films this summer. Fans have pinned heavy expectations on this stylish action entertainer and the film is also gearing up for its release in Telugu.

Theri’s theatrical trailer was released on March 20th and it was immensely liked by Vijay’s diehard fans. Now, the trailer has created a unique record by becoming the first film trailer in India to notch up more than 2 lakh likes on YouTube. The trailer also clocked nearly 55 lakh views, showcasing fans’ craze.

Theri’s Tamil version is slated for its release on April 14 and the Telugu version’s release date is yet to be announced. Directed by Raja Rani fame Atlee, this film also stars Samantha and Amy Jackson as female leads.