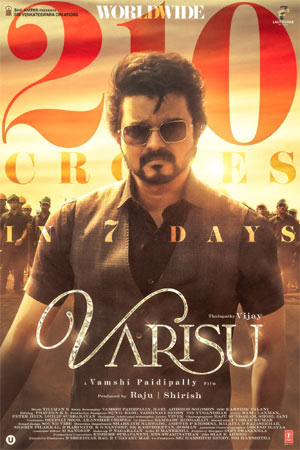 Thalapathy Vijay is now enthralling the audience with his latest flick Varisu which was released for Pongal. The movie was released in Telugu as Vaarasudu and is doing good business here too. Directed by Vamshi Paidipally, this is a family drama.

The movie has now crossed 200 crores gross at the ticket windows and is still going super strong. The production company tweeted the same a while ago. Varisu once again proved the box office stamina of Vijay, and we need to see how much the movie will rake in by the end of its run.

Rashmika Mandanna is the female lead, and the powerful tunes of Thaman also helped in the film’s success. Dil Raju produced this biggie which also has Sarathkumar, Prakash Raj, Jayasudha, Srikanth, Shaam, and Sangeetha in crucial roles.