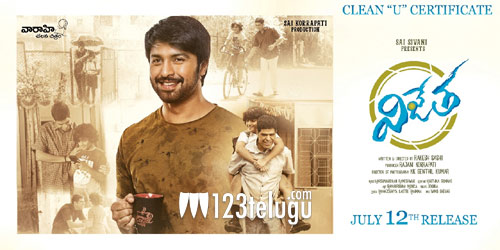 Megastar Chiranjeevi’s son-in-law, Kalyan Dhev’s debut film, Vijetha is gearing up for a July 12th release. Meanwhile, the latest we hear is that the film has wrapped up its censor formalities a while ago and got a clean U certificate.

Touted as a wholesome family entertainer, Vijetha’s story majorly revolves around the father-son relationship. Murli Sharma plays Kalyan Dhev’s father in the movie and his role is said to be quite crucial to the narrative.

Malavika Nair is the leading lady in the movie. Rakesh Sashii has directed the film and Sai Korrapati has produced it. Harshavardhan Rameshwar is the film’s music composer.