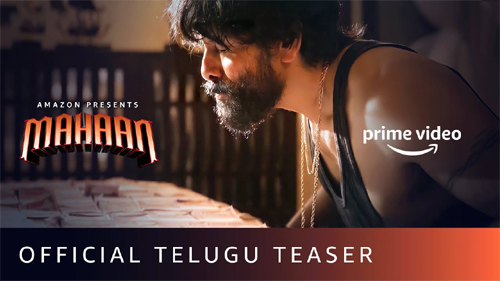 Mahaan is one of the most anticipated Kollywood movies in recent times. Chiyaan Vikram and Dhruv Vikram are sharing the screen space for the first time in this movie.

Directed by the maverick director Karthik Subbaraj, the movie’s teaser is officially out now. The teaser reveals Vikram in a new avatar. His salt and pepper look will wow his fans for sure. The teaser hints that the actor wants to be a billionaire in the liquor business and becomes the head of the syndicate. Meanwhile, the power-packed teaser doesn’t reveal much about Dhruv.

The teaser looks average but the screen presence of Vikram and Santhosh Narayanan’s background score make it watchable. We need to wait for some more time to witness Mahaan’s world in the trailer.

Simran, Vani Bhojann, Bobby Simha and others are playing significant roles in this action thriller, which is ready to release directly on Amazon Prime Video on February 10.

The movie will be available to stream in Telugu, Malayalam and Kannada besides Tamil. Santhosh Narayanan scored music for this movie, which has Shreyaas Krishna’s cinematography.