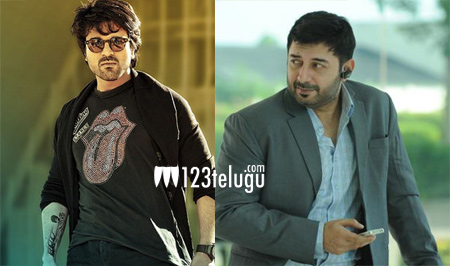 Mega Power Star Ram Charan Tej, who is gearing up for the massive release of his upcoming action entertainer Bruce Lee, has reportedly given the green signal to star in the remake of Tamil blockbuster Thani Oruvan.

If the ongoing reports are to be believed, the makers have decided to rope in the popular South Indian actor Aravind Swamy, who played a crucial role in the original, to play the antagonist role in the Telugu remake as well. Recently, the makers approached Aravind Swamy and the actor seems to have given his nod after much deliberation.

Surender Reddy will direct the Telugu remake and it will be jointly produced by NV Prasad and DVV Danayya. An official confirmation in this regard is yet to received. The makers are yet to finalize the leading lady of the film.

This film will go on floors in mid December. If all goes well, we might see Ram Charan playing a tough cop yet again in his career.