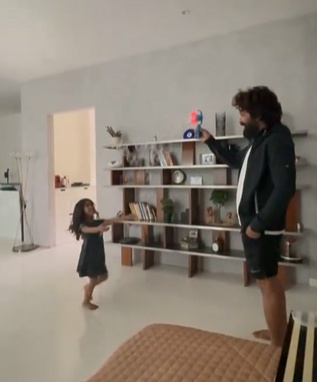 Allu Arjun is very close to his kids and often displays his love on social media. Bunny’s daughter has caught the attention of many as she doing Samantha’s Shakunthalam.

Now, as the shoot is done, Allu Arjun has found some time to play with her daughter. Bunny’s wife, Sneha has posted a video where Bunny is making Arha play with water balloons and the little one is enjoying her time.

On the other hand, Allu Arjun is busy wrapping up his new film Pushpa that will release during this Christmas season.