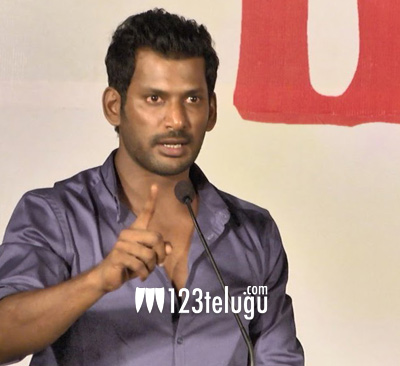 Actor Vishal is one of the most powerful man in Tamil film industry today. After winning the post of Nadigar Sangam’s General Secretary, the actor won the recent election for the President of Tamil Film Producers’ Council. Among the many initiatives that he wants to take up, Vishal has set his eyes on curbing movie piracy.

Over the past few years, Tamil cinema has lost crores of rupees owing to piracy and several producers had urged the film industry to come together to end this menace. “Now, the battle has begun.The guys who indulge in piracy will have to look for other jobs. I will block each and every possible loophole that gives room for piracy. I have plans to create a separate team to keep a track on movie piracy. Each and every piracy issue will be taken up and addressed. I will work towards a `no piracy’ state in Tamil cinema,“ Vishal said in a recent interview

Apart from this, Vishal also promised to work towards helping producers of small films to secure theatrical release and also reinstate state awards for film industry.