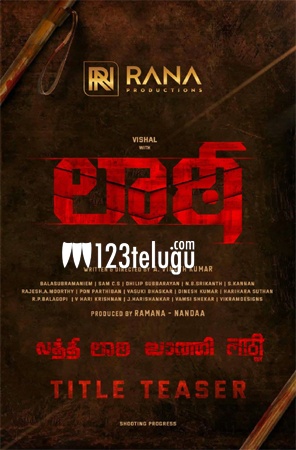 Kollywood hero Vishal’s 32nd film has been announced officially and it’s titled Laatti. Also starring young actress Sunaina as the female lead, the film is being made as a pan-India biggie. The film is touted to be a high-octane cop action drama. The makers also released a striking glimpse video featuring composer Sam CS’s electrifying BGM along with the announcement poster.

Laatti will be made on large scale and it will be released in Telugu, Tamil, Malayalam, Kannada and Hindi. The film will have the same title for all the five versions. Apparently, Laatti will be high on breath-taking action sequences, with 45 minutes of action sequences choreographed by Dhilip Subbarayan in the film’s second half being the main highlight.

A Vinoth Kumar will be directing the movie, while Ramana and Nandha are jointly producing the movie under Rana Productions.