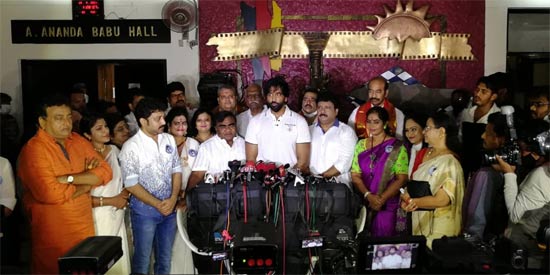 Actor Vishnu Manchu has filed his nomination at MAA office ahead of the MAA elections this afternoon. Vishnu first went to Film Chamber and took the blessings of veteran filmmaker Dasari Narayan Rao at his statue.

Vishnu is in race for president’s post in the MAA elections. He recently announced his panel that comprises of senior actors like Babu Mohan, Raghu Babu,Madhala Ravi, Prithviraj Balreddy (30 Years Prudhvi), Siva Balaji, Karate Kalyani and Gautham Raju and others.

Vishnu Manchu is taking on star character artiste Prakash Raj in the October 10 contest. The Manchu actor had vowed to build MAA’s own building if he’s elected.