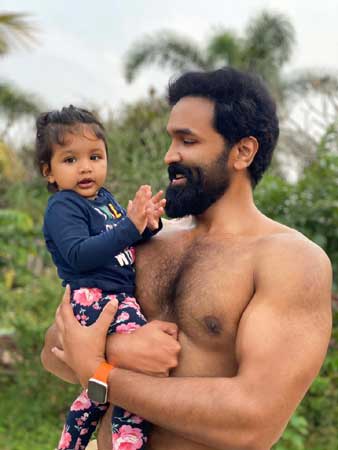 Hero Vishnu Manchu is awaiting the release of his maiden Hollywood film, Mosagallu. And on his birthday recently, Vishnu announced his next project with his Dhee director Sreenu Vaitla. Titled ‘D&D – Double Dose’, the film is tipped to be an action entertainer.

Vishnu is beefing up his body for his role in D&D. And he’s deriving the motivation to train hard in the gym from the WWE star turned Hollywood actor Dwayne ‘The Rock’ Johnson.

“My friends call me a Beast, which I am. But with this little one, I am a Gentleman Beast. Working it out for D&D. Thank you @therock for inspiring me to take this pic,” wrote Vishnu. He also posted a cute picture in which he poses with his doting little daughter Arya Manchu.