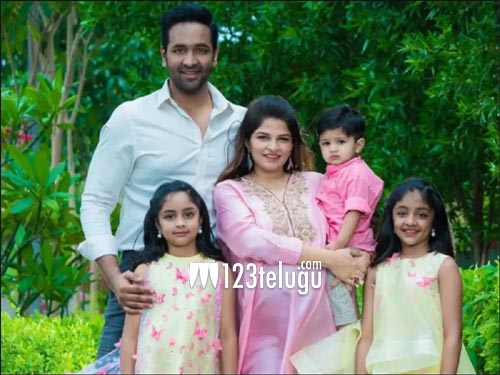 Vishnu Manchu and his wife Viranica have been married for four years now, and they have four kids including three daughters and a son. The couple’s youngest daughter was born in August, 2019, and it turns out that his friends and family members had a lot of interesting things to say every time the couple had a baby.

In a recent interview when Vishnu was asked about how his friends and family members have reacted to the news, Vishnu Manchu apparently laughed out loud recounting his conversations in the last few years. “I love kids. My friends keep asking me how we are managing with four kids when they decided to stop having kids after the first child was born. Among my family members, Jagan anna and Sharmila have been telling me to stop putting Viranica under so much stress. But the best reaction was from Subbirami Reddy uncle, who once said, ‘Don’t you have any other work to do?’,” Vishnu said.

The actor-and-producer will soon be seen in Mosagallu, and he’s also producing a big budget epic drama based on Bhakta Kannappa’s life and it will star Mohan Babu in a lead role.