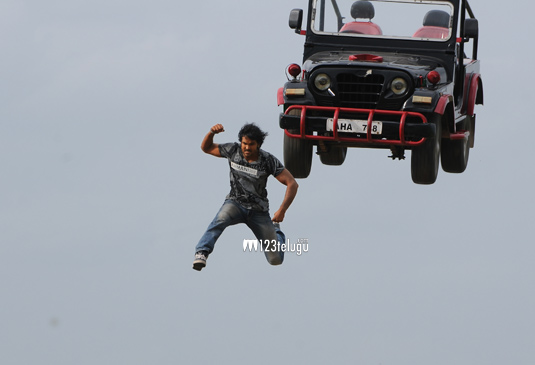 The Manchu brothers have a penchant for performing risky and dangerous stunts. Hero Vishnu Manchu performed one such stunt for his upcoming movie ‘Doosukeltha’ recently. For a fight sequence in the film, Vishnu jumped off from a jeep which was about 80 feet high in the air. Vishnu performed this stunt without any body double and the whole unit breathed a huge sigh of relief after the stunt went off well.

Thai fight master Kecha, who gained fame for his fights in ‘Iddarammayilatho’, is handling the fight choreography for this movie. Veeru Potla is the director. The movie is currently in the final stages of shooting.

Lavanya of Andhala Rakshasi fame is the heroine in this movie. The film is expected to be an action entertainer with a good dose of comedy and entertainment. Vishnu is producing the movie on his home banner.