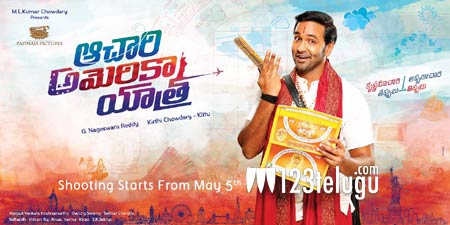 Vishnu Manchu will be flying to the US soon to kick-start his comedy entertainer, Aachari America Yatra​, from the 5th of May. Before that, the actor is busy wrapping up the latest schedule of his maiden Telugu-Tamil bilingual film, Voter.

Voter’s shooting has been underway in Hyderabad over the past few days, with key scenes featuring Vishnu and the film’s leading lady Surbhi being shot. This film is touted as a political thriller. Karthik Reddy is directing this movie, which is being produced by John Sudheer Pudhota.