Vishwaksen shares a heartfelt post for Venkatesh
Published on Sep 22, 2022 2:27 am IST 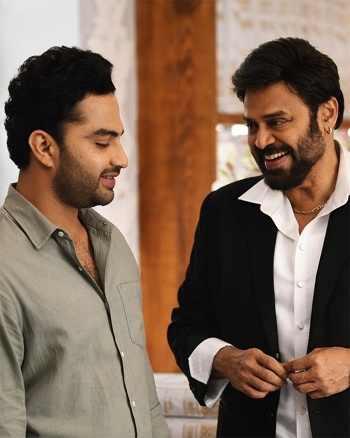 Actor Vishwaksen will be next seen in the film Ori Devuda. Mithila Parker is playing the female lead. This romantic fantasy drama will be releasing in theatres on October 21st. Today the makers unveiled a surprise glimpse featuring Victory Venkatesh in the God role and it is getting a good response.

Vishwaksen took to his Instagram and wrote that it has been such an honor to share screen space with the prestigious actor and with a man with no haters. The actor wrote that it is going to be a memorable thing for life and added that thank you is a small word.

The film is the official remake of Oh My Kadavule which had Vijay Sethupati in the God role. The film is directed by Aswath Narimuthu who also helmed the original. Asha Bhat plays an important role and it is produced together by PVP Cinema and Sri Venkateswara Creations.