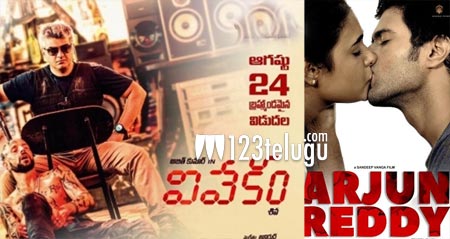 Tamil star Ajith’s Vivegam is releasing in Telugu as Vivekam. The film’s Telugu rights were bought for Rs. 5.50 crore. Both the Tamil and Telugu versions are releasing on August 24. However, the buzz for the Telugu version is shockingly poor.

Even though Ajith is a huge star, his star power is not helping the Telugu version even a bit now. Surprisingly, Vivekam is losing out to a small film like Arjun Reddy in terms of advance bookings. While Vivekam’s advance bookings are average at multiplexes and in A centres, the situation is worse in B, C centres. Arjun Reddy is dominating the proceedings in A centers as well as small towns.

In this scenario, even if Vivekam manages to open to decent talk, it will be a Herculean task for the film to break even. On the other hand, even the US premiere bookings for the Telugu version have been pretty dismal. Can Vivekam pull off a miracle from now on?