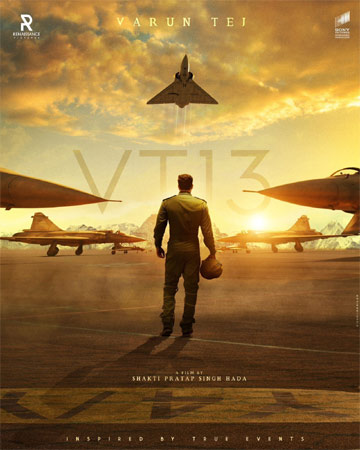 Mega Prince Varun Tej’s new movie, tentatively titled VT13, has been announced today. The Mukunda actor, well known for selecting versatile roles, is about to act in an inspiring story, which marks his Bollywood debut.

The action drama is inspired by Indian Air Force. Inspired by true events, this untitled film is a patriotic, edge-of-the-seat entertainer, and will showcase the indomitable spirits of our heroes on the frontlines and the challenges they face as they fight one of the biggest, fiercest aerial attacks that India has ever seen.

Produced by Sony Pictures International Productions and Rennaisance Pictures, the film will be directed by Shakti Pratap Singh – a seasoned ad-film maker, cinematographer and VFX aficionado who will also be seen marking his directorial debut with this film.

The film’s grand opening ceremony has happened today. The movie will be shot in Telugu and Hindi simultaneously and is expected to go on floors in November 2022 and will have a global release in 2023.