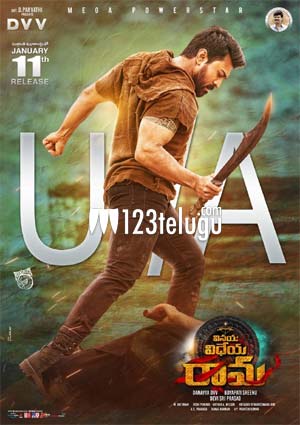 The censor formalities of Ram Charan’s Vinaya Vidheya Rama have been completed and the film has got a U/ A certificate.

With this, all the last minute formalities of the film have been wrapped up completely. The film will now release on the 11th of this month in a grand manner.

Boyapati Sreenu directs this film which has Ram Charan in a lead role and Kiara Advani is the heroine. Fans are dying to see Charan in a mass avatar for the first time in his career and let’s hope that the film reaches all expectations.