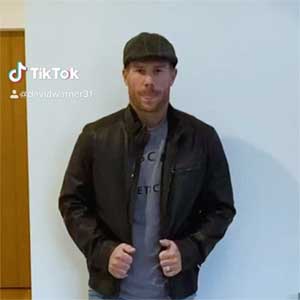 Star Australian batsman and Sunrisers Hyderabad cricketer David Warner is having a gala time during this lockdown. The actor has been reprising several hit Indian songs on TikTok, which are leaving his fans and even film stars impressed. Warner recently wowed Stylish Star Allu Arjun by reprising Butta Bomma and Ramuloo Ramulaa from Ala Vaikunthapurramuloo.

Now, Warner has given a new twist to Ramuloo Ramulaa in a latest TikTok video. He used an effect to clone himself and looked dapper in a black jacket, casual t-shirt and jeans. “What can you see with your eyes at the end??,” Warner wrote, as Sunrisers Hyderabad logo flashes on his goggles at the end. Impressed with Warner effortlessly oozing swag and style, fans are urging him to make his Tollywood debut soon.

Woke the beast 😂😂 what can you see with your eyes at the end?? #challenge #gettingbetter #fun #justsmile