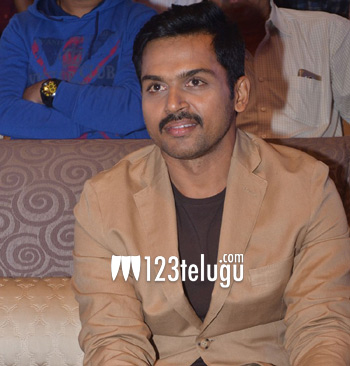 The Telugu audio of Karthi’s latest film in the direction of Mani Ratnam was launched a short while ago in Hyderabad. The entire team of Cheliya was present at the event which was also attended by Sirivennela Seetaramsastry and Vamsi Paidipally from Tollywood.

Speaking at the occasion, Karthi said that he was in complete shock when Mani Ratnam narrated the film to him. The ace actor also added that the first thing he asked Mani Ratnam was whether he would be able to carry out the role of a fighter pilot in the film.

Karthi’s look, in particular, has won huge appreciation all over the social media and A R Rahman’s songs have caught on quite well. Finally, Karthi thanked the ace director for giving him such a rare opportunity to change his image through the film.

Cheliya is presented by Dil Raju in Telugu and is up for a release on April 7th.