Watch movies in theaters without any fear – Talasani Srinivasa Yadav
Published on Dec 4, 2021 12:00 am IST 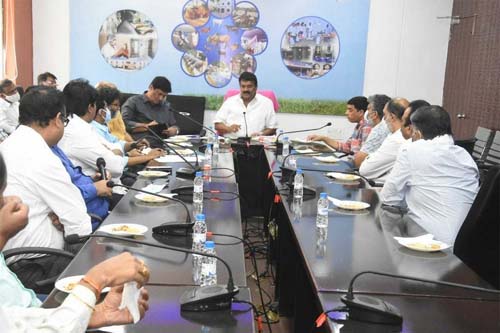 People can happily come and watch movies in theaters and there is no need to be afraid of the rumors that are doing rounds regarding the third wave of Corona, confirmed Talasani Srinivasa Yadav, Cinematography Minister for Telangana.

Today, the minister has conducted a special meeting with Tollywood producers and directors in Hyderabad. DVV Danayya, Dil Raju, Trivikram, Chinababu, Abhishek, Rajamouli, and Trivikram were some of the few attendees.

Talasani Srinivasa Yadav has denied the rumors that the Telangana government is planning to close theaters and reduce the seating occupancy. He reconfirmed that they allowed 100% seating occupancy for every theater in Telangana. He asked people not to believe such fake news.

The minister also mentioned that the viewership in theatres has been increased with the release of Akhanda and more high-budget films will hit screens soon.

Amid the Omicron scare, people are afraid to watch in theaters. Speaking about this, Srinivas Yadav said that majority of people in the state are fully vaccinated and by taking proper safety measures, people can enjoy watching movies in cinemas.