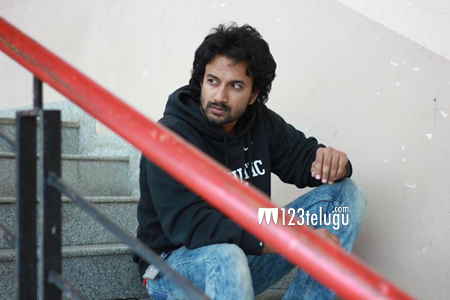 When you watch Isha Talwar’s uncle in Maine Pyar Kiya tomorrow don’t be surprised. The 40 plus character is portrayed by a man in his twenties. Satya Dev is a talented actor from Vishakapatnam . A B.tech in computer science, he always wanted to be in the movies since childhood. He works for an IT company part time and rest of the time he pursues his passion.

We might have seen him in a small role in Mr Perfect and SVSC and Attharintiki Dharedi but Maine Pyar Kiya will showcase his real skill as an artiste, the film in all probability will fetch him notice and appreciation and good roles too. He is currently acting in Gollabhama.

The actor has the flair to get into any character with ease and was spotted by artiste Vennela Rama Rao who forwarded his short film to director Pradeep. Satya Dev says, “Pradeep gave me something big and better. I play Isha Talwar’s uncle, I am okay not playing my age. The character has a story, he has been into coma for 15 years and then comes out.”

He adds, “At any given point of time I wanted to be in the films, but had to make sure I had the mandatory academics first. That done I am now looking for interesting roles. I draw inspiration from actors like Naseeruddin Shah, who follow method acting. I don’t practise it but I am working towards achieving it. People think acting is the easiest thing but it is not….if you don’t care about it acting is easy but if you do it is tough.”.