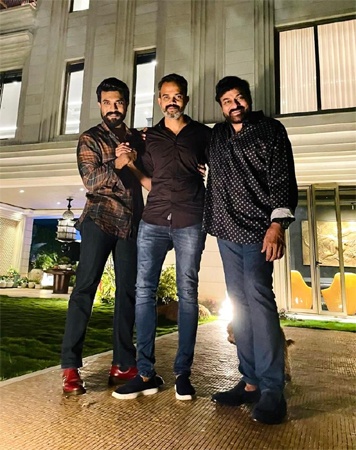 Yesterday, a viral photograph of Tollywood star Ram Charan, KGF director Prashanth Neel and RRR producer DVV Danayya led to speculations that both Charan and Prashanth will be teaming up for a project to be bankrolled by Danayya. Later, another photograph of Charan, Neel posing with Megastar Chiranjeevi at the Mega family’s residence also made a huge splash on the internet.

And this evening, at Natyam’s pre-release event, Charan made an interesting statement on his rumored film with Prashanth Neel. When asked by the media if he is indeed acting in a film under Prashanth Neel’s direction, Charan said, “we just had dinner. We will announce everything at an appropriate time.”

Well, Charan didn’t categorically deny the speculations and has unofficially confirmed the project with Prashanth Neel. This crazy project will be going on floors next year.