We wanted to see audiences’ smiles in cinemas: Naveen Polishetty
Published on Mar 8, 2021 7:08 am IST 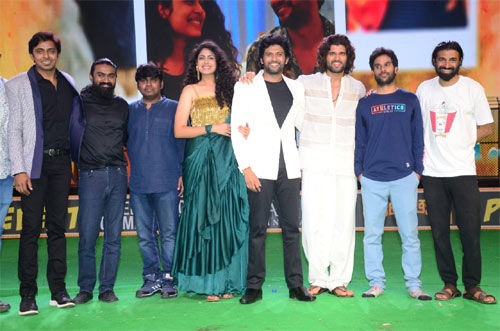 Young hero Naveen Polishetty’s Jathi Ratnalu is gearing up for release on March 11. The film’s pre-release event was held in Warangal last night. Speaking on the occasion, Naveen first recollected his struggling days and how he and his good friend and the event’s chief guest Vijay Deverakonda realised their dreams of becoming an actor.

Talking about Jathi Ratnalu, Naveen said that the makers of this comic caper wanted to see audiences’ smiles in the cinemas and that’s why they did not accept any OTT deals and decided to release the film in cinemas first. “COVID and lockdown have caused numerous sorrows in each and everyone’s lives. But only a smile has the power to make us forget our sorrows and give a hope. Jathi Ratnalu is that laugh riot which will make you smile,” Naveen said.

Also starring Priyadarshi, Rahul Ramakrishna and Faria Abdullah in lead roles, Jathi Ratnalu has been directed by KV Anudeep and produced by Nag Ashwin. Radhan is the film’s music composer.