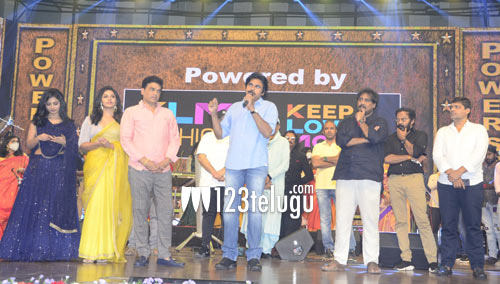 Hero Pawan Kalyan gave a marathon speech for over 30 movies at tonight’s Vakeel Saab’s pre-release event. Throughout his speech, Pawan stressed on the importance of treating women with respect, which is the main theme of Vakeel Saab.

“What is the point of chanting Jai Hind in public and whistle at women and tease them in private? I have always dreamed to see a country where a woman reaches home safely at night,” Pawan said. The Power Star was all praise for Pink’s makers and also the entire team of Vakeel Saab.

Pawan also said that he is again acting in movies as he didn’t want to take to corruption. “Whenever my film release, it gives employment for at least 1,000 people. I’d love to earn money, as I again invest it on the society,” Pawan said. Vakeel Saab, directed by Sriram Venu and produced by Dil Raju and Boney Kapoor, is releasing on April 9.